Search me, O God, and know my heart!

Try me and know my thoughts!

And see if there be any grievous way in me,

On Friday, August 11, a few hundred white supremacists assembled in Charlottesville, VA, to express their hatred for Americans who are not like them. Under the veneer of outrage over the statue of Robert E. Lee being removed from the campus of the University of Virginia, a blatant display of racist attitudes and hatred spewed forth from the protestors. At 1:42PM, James Alex Fields Jr. drove his car into a crowd of counter-demonstrators injuring 19 and killing Heather Heyer. This is evil. It is so obvious that I cannot even imagine anyone standing on the side of such hateful people. Many leaders were quick to respond with unequivocal condemnation as soon as the news got around.

In the midst of hearing this tragic news and being horrified by the display of hatred, I was puzzled by something. This quickly became a referendum regarding the white church. There were demands that we publicly condemn and denounce this. Of course! Why is that even a question? What is it about a racist display by a few hundred people in Virginia that connects to the church? Was the church – any church – leading or participating in it? Were Christians standing on the side of these people? I don’t know for sure, but I suspect that Christians would have been standing with the counter-demonstrators. Frankly, I couldn’t connect the dots. It just wasn’t clear to me how one begat the other. 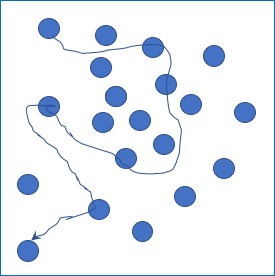 Nonetheless, there was a line that people were drawing between the supremacists in Virginia and the white church. I’m a linear thinker so I have to see things that connect in order to gain a bigger picture. I’m also naively committed to the idea that the people of Jesus don’t want to have anything to do with the kinds of things being said by those white nationalists. After all, to the Christian, love is central to our very being. Jesus demonstrated the love of God towards everyone with an invitation to join His family – where repentant sinners could live with an otherworldly affection for one another. But people of color who I know and respect were making the connection and I wanted to see it, as well.

An African American friend of mine simply said, “I hurt.” What was fomented in a few moments of violence and is easily condemned by most people, is suffered in silence by many of our friends and neighbors in other ways. I remember something I heard a few years back by an African America woman. She was responding to the “surprise” among white people that non-white people were being victimized by an incident of systemic racism. “I call that Tuesday,” she said. For me, Tuesday is just Tuesday. It is not right that people I love should have Tuesdays of which I am unaware.

I am an older white American who grew up in the heartland of this nation. It was not a racially diverse environment. It did not lend itself to cultural understanding because there were few cultural lines to cross. The race stuff happened “somewhere out there.” Many of us had a conditioned insensitivity to the injustices suffered by fellow Americans of color. It just didn’t touch our world. I admit this to my shame. But I don’t want to go through life ignorant about race relations in America and the impact it has on my friends. Time and again black friends have shown me what I could not see through my eyes and I was deeply moved.  One of them described a situation where he was in a restaurant with a couple of white friends. He went to the restroom and was followed in by two big men who threatened him and tried to provoke him to fight. He is not a big man and is certainly no fighter. He was sure he was going to be beaten to a pulp and it frightened him. But he prayed silently and the two assaulters grew impatient and left. Upon hearing the story I asked him what his white friends said when he told them. He said, “I didn’t tell them. I was too embarrassed.” He has the same desire we all have – to belong – but there are times in American life, like this, where he is reminded that he really doesn’t belong.

In order to connect the dots, I read article after article about the event, each of which tried to explain the connection between Virginia and the white church. Political, socioeconomic, psychological, and academic explanations laid out cases for the church being part of the problem that lead to what happened. While I found some of the articles frustrating and their arguments tortured, I did begin to understand how many people see the dots connecting. As another friend said, “first seek understanding, not agreement.”

Now I get sensitive about the church being blamed for injustice, because the pure church – the one God intended – cannot be a participant in injustice. However, it is undeniable that the church in America has not always stood on the right side of justice.  Furthermore, my friend hurts. If we love Jesus and want to be reconcilers, we, the white America church, need to submit ourselves to the revelation of the Holy Spirit (Psalms 139:23-24) so we can correct flaws in our very character. So I can argue about the connections of which I disagree. But it is better for me to be open to considering how the dots get connected by my brothers and sisters. Which of the dots that were being connected are ones I stand on – even if tepidly so? Some things that we should ask ourselves:

I don’t like being exposed, but these recent events reminded me of an insipid form of racism for which I bear responsibility – insensitivity. Galatians 6:2 says that we are to bear one another’s burdens. How am I to bear burdens if I don’t hear the cry of my brother when he says, “I hurt.”  There is a straight line connection between dots I cannot deny.

Am I willing to be crushed in the crucible of truth? Do I see my complicity? The good news of Jesus condemns racism in no uncertain terms. We need to listen. I need to listen.

Dr. Mark Nicklas is a husband, father, son and follower of Jesus Christ. He is a pastor at Beaverton Foursquare Church and an adjunct professor at Multnomah University, where he earned his doctorate in Cultural Engagement. Like Jacob wrestled with God at Jabbok, this site is a place for talking about the identity of the church with respect to the cultures we live in. You are invited to share the journey.
View all posts by marknicklas →
This entry was posted in Uncategorized. Bookmark the permalink.

a mind put to pen

Random Thoughts on Christian Life and Reports from the Mission Field

beaverton foursquare's Kingdom paths into the world - here, near and far

Making room in God's house for all children

Killing Them Softly, with Negrodamus

Once you go black...

Thoughts on being Ambassadors for Christ

Compelled2: A Mission of Reconciliation

Reflections on the loving kindness of the Triune God