Jacob wrestled with God at Jabbok (Gen 32:22-32).  His world had turned upside down.  He had fled the home of his father-in-law.  He was returning to his family home in the land of Canaan.  His brother, who had vowed to kill him, was approaching with an army of men.  He sent emissaries in the hope that he could cajole his brother and make a truce.  And now he was with his wives and children, ready to cross the river and encounter his brother.  Add to that that he was a guy with serious identity issues.  He was dissatisfied with his place in life and longed to be someone he was not, even telling his father at one point that he was Esau, his older brother.  So with danger on both sides, insecurity about who he was, and an uncertainty about how God would show up, he wrestled all night with God. And something changed.  He was even given a new name, Israel. 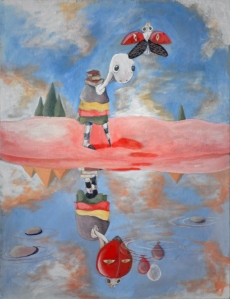 I am going to use this blog to do some wrestling.  I am in a doctoral program at Multnomah University studying cultural engagement.  It has been challenging!  In the past two weeks I have listened to Christian men and women from a variety of cultures and in various cultural engagements who have forced me to wrestle with some Christian identity issues and some theological issues.  Some of the sacred things I included in my Christian worldview are being discarded.  Jesus is showing me new things and refreshing my perspective.

I want more than anything for people who do not know Jesus to meet Him and to walk along the road with Him.  I have had the privilege of being with people when they began such walks and I have seen their transformation as they learn to be loved by Him and become more and more like Him. I especially enjoy when our roads intersect again and we get to share the journey, talking about Jesus and what he is showing us.

Each week I will be sharing a journey, things coming up through my study, here at Jacob’s Brook.  I invite you to come along with me.

a mind put to pen

....coming at it from a different angle

Random Thoughts on Christian Life and Reports from the Mission Field

beaverton foursquare's Kingdom paths into the world - here, near and far

Making room in God's house for all children

Killing Them Softly, with Negrodamus

Once you go black...

Thoughts on being Ambassadors for Christ

Compelled2: A Mission of Reconciliation

Reflections on the loving kindness of the Triune God